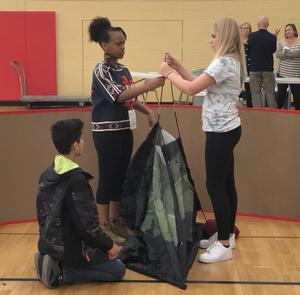 Experience provides students with a glimpse into what many refugees endure when fleeing from their homes
At Shorewood Intermediate School (SIS), as part of their World Geography and Language Arts classes, seventh graders are currently doing a unit that focuses on topics around citizenship and social justice. The goals of the unit are to develop a sense of citizenship and social awareness. In World Geo, students are working to identify reasons that people migrate (push and pull factors) and become familiar with current issues facing our world and nation, as well as learning how to gather information from multiple and opposing perspectives to create an informed stance on an issue of public concern. In Language Arts, students are increasing their understanding of social justice issues, building empathy for those who suffer injustice and becoming empowered to lend their voices and energy to help those who are suffering.
To kick off the unit, on Friday, May 10, the seventh grade students were given the opportunity to experience a “Forced From Home” refugee simulation which builds background knowledge surrounding the experiences of asylum seekers and provides students with a powerful glimpse into what many refugees endure when fleeing from their homes and living in a refugee camp. The simulation was reworked by SIS staff, building off the simulation that SIS hosted three years ago from the Global Human Project- Walk a Mile Refugee Simulation, which was generously funded by the SEED Foundation. The students were divided into family groups of five and each was given a new cultural identity, representing Syria, Somalia, Bhutan, Burma, Cuba, El Salvador, Yemen, and other nations to reflect the 68.5 million currently displaced persons in our world. The students had to study and memorize their new background and identities, which were constructed from real primary source documents and interviews. The groups were then asked to travel through the simulation, where they would encounter the hardships that are common to refugees living in camps.
The experience began when the students crossed the national border to reach a refugee camp with their family (in the SIS gym). Throughout the process, many students encountered smugglers and scenarios to barter for documentation and safe passage. They also experienced waiting in lines, evading security to avoid detention and jail experiences, as well as security check interviews and meetings with immigration judges.

Teachers and staff members--representing border control--asked to check the students' papers and some families were rejected while others were allowed to enter the new country (the SIS Gym).
Those who successfully entered, had to proceed to the United Nations High Commissioner (UNHCR) for Refugees camp, where they faced the following challenges at different stations set up throughout the gym: When the simulation concluded, the students engaged in debriefing conversations and had the opportunity to reflect on their experience, sharing insights through writing.
Later that day, students worked through four lessons with teachers to identify push and pull factors that have impacted human migration historically and in our current time. They also engaged in the reading of primary source documents and had access to Virtual Reality experiences which portray the experiences of migrants who have been forced from home in order to gain background knowledge and build empathy. Students also had the opportunity to meet guest speakers who are DACA immigrants and current college students in Milwaukee, as well as refugees who have been given asylum status here in the United States, and immigrants who have all had different experiences in their journeys from their homelands.
“This was a very valuable opportunity for students to learn about contemporary global issues and national issues of concern,” says SIS World Geography teacher Sarah Kopplin. “It was also an opportunity to relate to others and to build empathy for people whose lives differ from theirs because they have been forced from home. We hoped it provided an authentic experience that would be otherwise impossible to achieve in a traditional class setting.”
As for what’s next, the unit will culminate with a letter writing project in World Geography, through which students will learn how to demonstrate civic awareness and responsibility. In Language Arts, the final project will consist of reading a variety of short texts from the genres of memoir, nonfiction, poetry, and a novel that grapples with social justice problems such as bias, prejudice, and racism.
View photos from the simulation here.