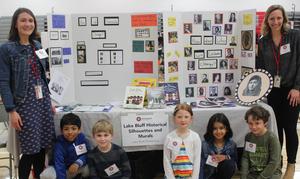 Lake Bluff MAC 1 Birch class combines history and biographies into exciting school project
As part of their 1st and 2nd grade curriculum for social studies, Lake Bluff Elementary students learn about history, past and present. The students have the opportunity to walk around the school and receive insight on not only the elementary school’s history but also the Shorewood community as well. In addition to this, students also participate in a Biographies unit where they focus on nonfiction reading and writing.
This year, while giving the historic building tour to students, MAC 1 Birch teachers Virginia Kashen and Katie Kalt came up with the idea to combine these two units into a very unique activity.
“On our tour, we show students the six original classrooms of the school,” says Kalt. “Each classroom is dedicated to a famous person in history and above each original classroom’s doorway, there is a silhouette of a famous person, along with a mural painted of them in the classroom. This year, while we were giving the tour, keeping Raceworks in mind and thinking about the equity aspect, we had the realization that it would be interesting to talk with our students about what the six people had in common and figure out why they were represented. Then, for our project, answer the big overarching question of 'How does who we celebrate change?' and determine what silhouettes we could add to the mix to better represent who we celebrate today.”
Shortly thereafter, Kashen and Kalt gave their students mini pictures of the six silhouettes and asked students to answer the following questions.
Six Original Silhouettes
Poet Henry Wadsworth Longfellow
Poet Robert Louis Stevenson
Naturalist John J. Audubon
First President George Washington
16th president Abraham Lincoln
26th president Theodore Roosevelt
What do they have in common?
Students came to the conclusion that they were all male, white, deceased, famous, and they all did something good for the community or the world.
Why were they selected to be in the six original classrooms?
Students concluded they were all wise or smart, were people who would be important to our school, and all represented something about the school or what we study at school.
Following this discussion, students were charged with researching and coming up with other famous, influential people they felt should be represented in the silhouettes. Once a large list was compiled, the students voted together on their top choices for the 21 classrooms which would be adding silhouettes to their doors.
“This was really a great activity for the students,” says Kashen. “It was very eye opening for them to see that we value people of different genders, races, ethnicities, and that we can value them for their artistic abilities, athleticism, and many other different talents. We had such a great conversation that day with the kids and it was super honest. So, we decided in honor of Lake Bluff’s 95th birthday, we would give new silhouettes to all of the classrooms in the building.”
New Silhouettes Chosen
Authors/Artists
Maya Angelou
Frida Kahlo
JK Rowling
Athletes
Jackie Robinson
Lebron James
Serena Williams
Michelle Kwan
Explorers
Amelia Earhart
Sacagawea
Inventors
Ada Lovelace
History Makers/Civil Rights Leaders/Supreme Court Justices
Martin Luther King Jr.
Helen Keller
Malala Yousafzai
Rosa Parks
Musicians/Entertainers
Louis Armstrong
Ellen Degeneres
Scientists
George Washington Carver
Albert Einstein
Jane Goodall
Presidents/First Ladies
Barack Obama
After the list of 21 people was determined, students again voted for who they wanted to research. They could work with a partner or by themselves to write biographies on their selected individual and assist with the creation of silhouettes. A classroom parent, specializing in graphic design, helped students to print images of each influential figure and then the students made frames to match the original silhouettes in the school. When students completed their research, they shared their biographies with one another and the temporary silhouettes were placed above each classroom at the end of the year.
“This project was such a great opportunity for us to have conversations with our students about fairness, equity, and inclusion,” says Kalt. “The kids were really excited about fixing the problem of who was represented in the silhouettes. I think they were also excited to have a real audience in the Lake Bluff School community, and took the project very seriously because they understood that they were really making a difference in helping to change the school and make everyone feel good.”
Kalt notes that even parent feedback on the project was very positive and that parents were surprised in a good way that the teachers were taking this on.
As for plans for the future, both Kalt and Kashen agree that this project was a great starting point. They hope that by having these visible silhouettes mounted above each doorway, that it will continue to spark conversation amongst students and staff, and that the school community will be interested in learning more about these influential people.
“I think eventually when Lake Bluff turns 100 in a few years, it would be great if we could work with an artist to create more permanent, lasting silhouettes for each classroom door,” says Kashen. “The hope would be that we could make it more of a cross-age crew, school-wide project where all of the students have a voice in which silhouettes are represented.”