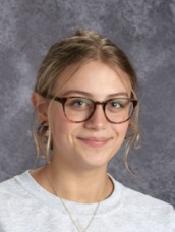 Olivia Johnson is among only 33 Wisconsin students selected to participate in the program
Congratulations to SHS junior Olivia Johnson, who was selected to participate in the Wisconsin Legislature’s Senate Scholar Program. Admission to this intensive, week-long educational program is highly competitive and limited to 33 academically exceptional high school juniors and seniors from around Wisconsin.
Each Senate Scholar receives a hands-on, up-close view of the Legislature’s role in our democracy. The Scholars gain experience in such diverse areas as policy development, constituent relations, and processing legislation by working with senators, legislative staff and University of Wisconsin faculty. See the schedule for this year's Scholar Program below.
Johnson was unanimously chosen by the Shorewood High School social studies faculty to apply to the program. She will represent District 4 and SHS during a Senate Scholar Week in 2020.
Senate Scholar Program Schedule 2020
Monday
-Overview of How a Bill Becomes a Law: from a constituent’s concern to a Wisconsin Act. Discuss the myths around the “Power of Politics.”

-Topic Introduction. An expert will introduce and discuss the week’s public policy initiative.

-Media Roundtable. Discussion about their jobs, their role in the legislative process, and how they would approach a story regarding the week’s public policy initiative.

-Constituent Relations. Meet with experienced Senate office staff to discuss serving constituents and the other roles they play in their positions.

Tuesday
-Intern as a Messenger for Senate Floor Session. Wrap-up discussion at the end of the day concerning session.

Wednesday
-How to Draft a Bill. Understanding the intended result, accomplishing that result through accurate writing, and avoiding unintended consequences. Presented by the Legislative Reference Bureau staff.
-Legislator Drafting Role Play. Scholars mimic the real world when they present an idea to a Legislative Reference Bureau drafting attorney, the drafter writes the language, and the Senator makes sure the language reflects the intent.
Lunch at the Executive Residence.

-Draft a Bill. Draft a bill implementing an idea for legislation to address the constituent concerns under discussion. Review specific issues and bill drafting strategies. Critique the drafts of hypothetical legislation and choose the one that best accomplishes the desired result. That draft will be introduced, distributed to Senate Scholars as bills, and scheduled for a mock committee hearing. Divide into groups according to position on the issues. Scholars may then draft amendments for introduction.

-Finish Bill Drafts of Hypothetical Legislation. As a group, critique the drafts of hypothetical legislation and choose those that best accomplish the desired result. The drafts will be introduced, distributed to Senate Scholars as bills, and scheduled for a mock committee hearing. Divide into groups according to position on the issues.
Lobbyists Roundtable. Discussion about their jobs, their role in the legislative process, and how they would proceed with an idea for legislation addressing the week’s public policy initiative.

Thursday
-Visit La Follette School of Public Policy on the University of Wisconsin-Madison campus.
-Intern as a Messenger for Senate Floor Session or Committee Hearing. Wrap-up discussion at the end of the day concerning session.
-Prepare for Friday’s committee hearing.
Friday
-The Governor’s Role in the Legislative Process. Presented by the Governor or the Governor’s staff.

-The Role of the Judiciary in State Government. Presented by a Supreme Court Justice or judicial staff.

-Prepare Testimony for a Mock Committee Hearing. Scholars in the “for” group must prepare to testify in favor of the bill. Those in the “against” group must prepare to testify in opposition of the bill. Groups must anticipate the arguments of the other side, prepare questions to ask those who testify, and prepare responses to questions they are likely to receive.

-Mock Committee Hearing. Parents and relatives are welcome to attend and participate. Committee hearing will be staffed by a Senate Committee Clerk.
Reception and Awards Ceremony. Parents are invited and encouraged to attend. Program conclusion. Senate Parlor.

Program concludes and scholars are released from supervision.