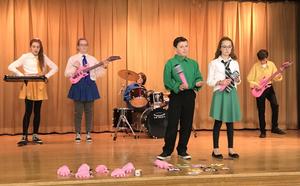 Drama Junior director Sara Vanloon, Rec supervisor Justin Calvert, and two high school students share successes of the program with the School Board
The Shorewood Recreation Department offers Drama Junior productions three times each year—winter/spring, summer, and fall—and this program gives students in grades 4-8 an opportunity to learn about theater and produce a play. The students serve as performers, stage crew, costume crew, light/sound technicians, set designers, and much more.
District staff, along with student and parent volunteers, supervise the program over a 7-12 week period and the program concludes with multiple performances of the chosen play. Drama Junior serves as a great introduction to the complete theater experience, and many of the participants go on to participate in the high school theater program. They also return to support the program itself as volunteers and staff.
Though the program is now a well-oiled machine, it took a lot of work to get the program to where it is today. Sara Vanloon, the longtime director of Drama Junior, was asked in 2008 by then SHS Drama director Barb Gensler if she wanted to start a drama club in the summer. Vanloon took her up on the offer and created a musical review called A Musical Stimulus Package in which she combined songs from Broadway and movies, and created little vignettes. There were only 8 students who participated in the first production (playing multiple roles) but it was a big success, and one production per year turned into two and now three, with multiple performances.
“The program just catapulted and we are now at a place where we have waitlists for our summer Drama Junior production,” says Sara Vanloon. “ Not only is it a fun opportunity for students but it also teaches them a ton of important skills. We cast these kids as both performer and technician and they learn a variety of practical life skills that help them in other areas. They practice patience, they listen to and cooperate with others, they understand time management, they respect other people’s belongings, they help to deal with frustration or defeat, and a lot of other things.”
The fall production, Rock Star U-2, was a sequel about a university that attracts aspiring rock stars to attend. The student participants learned a lot about the history of rock’n’roll during the process and even created their own music video. At the Board meeting, one music video was played of students in the fake band “Breather” (a parody of Weezer) singing Hickory Dickory Dock.

“That was just a short two-minute sample of the awesome creativity the kids provide as well as the exceptional staff members who assist,” says Justin Calvert, Recreation Department supervisor. “What is truly amazing about this program is that we have representatives from all four schools participating in some capacity and it’s great to see this cross-school collaboration.”
At the Board meeting, two high school seniors, Zoe Nahmmacher-Baum and Alex Alden also spoke to their experiences in Drama Junior as both former participants in the program and now paid staff members. Zoe is the current costume designer and Alex is the music director for Drama Junior production.
“I really do owe a lot of great experiences to Shorewood Rec department, especially Drama Junior,” says Alden. “Shorewood has a very high standard of the Arts and Shorewood Drama Junior is a tremendous place to get that started. It really pushes you. I remember my first show I was just a little turtle and by my last show I was Horton the elephant, a lead in Seussical. The progression during my time in Drama Junior and how much I’ve grown as an actor is incredible. This program is so rewarding because it has not only given me an opportunity to improve my trade but also to give back to other students. The students push you as much as you push them.”
“I’m applying to colleges now, writing about extra-curriculars for my essays, and I’m always writing about drama,” says Nahmmacher-Baum. “Through the years, it’s become a main staple in my life—what I do after school/on weekends/in the summer—and it all traces back to Drama Junior which got me involved with the program to begin with. In 5th grade, I wasn’t even really interested in theater but joined because of a friend in the performance. I tried all the various tech positions and eventually found my passion in costumes which I’ve stuck with ever since. What I find most remarkable about Drama Junior is that every staff member (excluding Vanloon) is a graduate of the program! As a staff member, we get this remarkable professional experience that I feel would be impossible to do anywhere else. I’m still learning so much and I will likely continue with costume designing through college.” During the school year, the two shows that are put on by students are original works Vanloon writes herself. She shares that this has forced her to be super creative with her ideas and that she has begun to involve the students in her brainstorming, asking them about genres and ideas.
The upcoming winter/spring show is called Americanarama and will teach the audience many little-known facts about the United States. The production dates are Saturday, April 18, at 4 p.m. and Sunday April 19, at 1:30 p.m. Tickets will be available closer to the performance dates. With any questions, contact the Recreation Department at 414-963-6913.