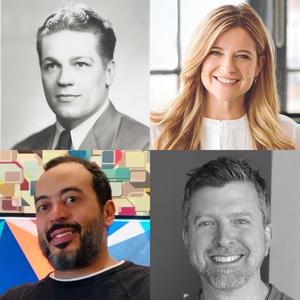 Four Shorewood High School graduates to receive Tradition of Excellence Awards
UPDATE: Due to the Coronavirus pandemic, this event has been postponed indefinitely.
The Shorewood School District will honor four graduates for their achievements and service to their communities at the Shorewood Tradition of Excellence Awards Day in April.
Shorewood alumni Mike Fratantuno (Class of 1988), Richard “Dick” Geske (longtime coach, teacher, administrator), Elizabeth Graves (Class of 1991), and Terence Y. Graves (Class of 1987) will be recognized during a special day-long event at Shorewood High School on April 17, which will include an awards ceremony at an assembly for all students, a luncheon, a tour of campus, and a reception sponsored by the Shorewood High School Alumni Association.
"We look forward to honoring these Shorewood alumni who have demonstrated many of the outstanding character traits that we hope to instill in our future graduates," says Shorewood Superintendent Dr. Bryan Davis. "We are very proud of their accomplishments and we are grateful for this opportunity to recognize them, as they help our students understand the importance of service to their community."
Established in the year 2000, the Tradition of Excellence Awards are bestowed upon Shorewood High School graduates or faculty who have distinguished themselves in a diverse range of areas, including community and public service; science, engineering, and technology; medicine and public health; the arts and humanities; business; government and political service; education; military service; philanthropy; and other professions committed to serving others. Previous honorees include Chief Justice William Rehnquist and U.S. Congressman and Secretary of Defense Les Aspin, among others.
The 2020 Shorewood Tradition of Excellence inductees are:
Mike Fratantuno (Class of 1988)

Mike is a film and television composer, a songwriter, and a musician. He is co-founder of Transcenders, a music house based in Los Angeles that has been providing both score and music production for entertainment projects since 2001. Transcenders are currently composing original score for CBS’ Madam Secretary, ABC’s Black-ish, and ABC’s Mixed-ish.

Born in New Jersey, and raised in Milwaukee, Mike attended Shorewood High School where he was very active in both the theater and music programs. Under the direction of one of his favorite teachers, Barbara Gensler, Mike took part in as many productions as he could while at SHS, and still has lasting friendships from his time on the stage. After graduating from SHS in 1988, Mike attended the University of Wisconsin-Madison, where he majored in Philosophy, and minored in drinking coffee and playing bass in as many bands as possible. In fact, it was a coin toss with a guitar player in one of those bands that settled Mike’s decision to move to Los Angeles instead of New York to pursue his dream of becoming a professional musician.
Soon after moving to L.A., a connection to another SHS alumni proved to be a creative windfall when Terence Graves called upon Mike to help establish the band for the hip-hop group, The Black Eyed Peas. Over many years as a bass player, songwriting partner, and touring musician with BEP, Mike helped to create a sound that would eventually result in a multi-platinum record, Elephunk, two Grammy nominated hit songs, Where Is The Love, and Let’s Get It Started, and years of traveling the world.
After leaving the band to start a family, Mike again joined forces with Terence Graves and another longtime friend, Brian Lapin, to pursue a career in composing for film and television as Transcenders. They got their big break when they were hired to do the Friends spinoff, Joey, and followed that up with six seasons of the hit series, Gossip Girl, and a host of other shows. The three have had a successful musical partnership for the past 18 years, and pride themselves on creating an environment where all musicians are treated with fairness, equality, and respect.
Mike currently lives in Los Angeles, California, and enjoys spending time and traveling with his wife, Jodie, and two children, Joe (17), and Evan (15).
Richard “Dick” Geske (longtime coach, teacher, administrator)

Dick was born on December 1, 1918, the eldest of 4 children. An All-Conference athlete at Milwaukee State Teachers College/UW-M, he earned 4 letters in football and 2 in track. Following the bombing of Pearl Harbor, Mr. Geske interrupted his college career to enlist in the Marine Corps, earning the rank of First Lieutenant. All of his overseas service was in the South Pacific. After the War, Mr. Geske returned to UW-M where he was voted Homecoming King for the second time and where he met his future wife, Alyce Mae King. They graduated in 1947, were married in 1949, and in 1952 built a home in Shorewood where they raised 3 children and lived for 40+ years.

Although Mr. Geske was offered a contract with the Boston Yanks, a professional football team, he chose teaching and coaching as his career path. He taught science and social studies at West Division High School while also coaching their division-winning football team and their track team. After completing a Masters Degree in Educational Administration from Marquette University in 1950, Mr. Geske went on to teach biology and coach football at Whitefish Bay High School where from 1952-1957 his teams won 2 Suburban Championships and once shared the title. After 4 years in business with Norco Plastics Company, in 1961 he returned to teaching and coaching at Shorewood High School.
Shorewood had dropped Freshman Football in 1958 due to a lack of numbers. Mr. Geske rekindled that interest in football and in 1963 Freshman Football was reinstated. In 1967 Shorewood won the Suburban Championship giving Mr. Geske the honor of being the first head football coach to win championships at two different Milwaukee Suburban Conference high schools. His greatest strength as a coach was his ability to read talent in players and convince them they could be better than they ever imagined. He got players committed to him and the team and, as a team, they played championship football. In 1973 Mr. Geske was the second honoree to be inducted into the UW-M Athletic Hall of Fame.
In 1970, Mr. Geske was named Assistant Principal of Shorewood High School. He was already well respected by students, staff and parents and known to be very fair. He would listen to what the teachers had to say but would always get the student’s point of view too. He believed “someone had to pave the way for an agreement which would put the relationship between the student and the teacher back into working order.” One student described him as “a gentle giant…you could feel his sense of compassion and knew that he truly cared for you whether you were an outstanding athlete or an outstanding discipline problem!” If Mr. Geske needed to call a parent about a problem he would ask, “What can we do together to help rectify the situation?”
Mr. Geske was a Teacher, Coach, and Assistant Principal at Shorewood High School for a total of 22 years. He retired in 1983. He passed away in 1997.
Elizabeth Graves (Class of 1991)

Elizabeth is Editor-in-Chief of Martha Stewart Living. She started working for Martha Stewart as an editor at Blueprint, a shelter-title start-up, in 2005 before taking the EIC role at Martha Stewart Weddings in 2010, and then moving into the same role on the flagship title in 2015. Last year, she acquired oversight of both magazines, and today oversees both brands’ editorial and visual content, and helps shape its presence across media platforms.

Elizabeth was born in Milwaukee, Wisconsin, and attended Atwater School, Shorewood Intermediate School, and Shorewood High School (class of ’91). During her childhood, she learned how to sail on Lake Michigan, which began a lifelong passion for the water and the environment. She studied at St. Mary’s College of Maryland, where she received a B.A. in psychology with a concentration in English. During that time, she continued to sail, and led the sailing team to their first-ever ICSA Women's National Championship. Over the course of her four-year career, St. Mary’s reached the podium every year at the women's nationals. After the national championship win, Elizabeth was voted All-American skipper in 1995, and later inducted into St. Mary’s College Athletic Hall of Fame in 2018. Academically, studying under Maryland’s poet laureate and Pulitzer Prize finalist Lucille Clifton was a turning point in Elizabeth’s life; she decided to pursue a writing career—and to focus on writing about what she loves. After graduation, she penned articles about restaurants and local chefs for a small newspaper on the Outer Banks of North Carolina. Then she moved to New York City in 1997, where she got her first job at Condé Nast’s Allure magazine. In the years that followed, Elizabeth served as an editor at Self and Real Simple, and wrote numerous titles as a freelance writer on a variety of topics.
Today, she lives in Manhattan’s West Village with her husband, Jeff Young, who is also a Shorewood High School graduate (’90), and their son, James. She serves as a trustee on her college board, and she’s most proud of being a mom and class parent to her son’s kindergarten class.
Terence Y. Graves (Class of 1987)

Terence is a founding partner of Transcenders Music Group based in Los Angeles, California. Transcenders have produced and composed music for numerous television and film projects over the past eighteen years, and are currently creating original score for CBS’ Madam Secretary, ABC’s Blackish and Mixed-ish franchises.

Born in Milwaukee, Wisconsin and raised in Northern California, Terence and his family returned to Wisconsin where he attended Shorewood High School. As an active participant in athletics, he lettered in multiple sports all four years and was notably a member of the boys volleyball team that earned second in the state tournament his senior year. After graduating in 1987, Terence went on to the University of Wisconsin, Madison earning degrees in Psychology and Communication Arts with an emphasis on Radio, Television and Film.
After graduating from UW-Madison in 1992, Terence moved to Los Angeles to start a career in the entertainment industry with experience working on numerous films and music videos as a camera assistant. After his time in the film industry, he landed at Virgin Records as a National Radio Promotion Manager, working with artists ranging from Janet Jackson, Lenny Kravitz to Ben Harper and more. During this time, Terence helped establish the band for hip hop group, The Black Eyed Peas and served as their touring drummer and collaborator, earning a Grammy nomination for co-writing their breakout hit, “Let’s Get It Started”.
Terence currently lives in Los Angeles, California where he enjoys spending time with his family and raising his teenage son Kofi.