Atwater Students Selected as “2020 Can You Find Mapman®?” Runner-Ups 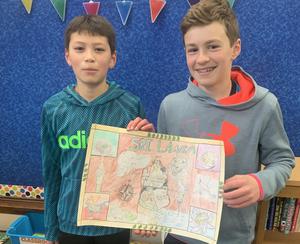 Julian Su and Vinnie Bolliger receive recognition out of nearly 3,500 entries from 33 states
Atwater sixth grade students Julian Su and Vinnie Bolliger were one of 25 entries selected as a runner-up in the 2020 Can You Find Mapman? Contest, out of nearly 3,500 entries from 33 states. The contest, put on by Junior Scholastic, asked students to answer a series of questions using a provided map of South Asia (shown below), find out Mapman’s* final destination, and draw a map of the country where it’s located.
Julian and Vinnie's map submission is below: “Julian and Vinnie worked together on this project for several months this winter and I am so proud of them,” says Atwater sixth grade teacher Carrie Zuithoff. “Since it was to be an independent entry, Julian and Vinnie chose to use Julian's name on the entry form since he did the artwork. Vinnie was by his side for the many hours spent creating the map and answering the contest questions. He did research and gave Julian feedback and encouragement every step of the way. The boys spent dozens of recesses, independent work time during some guided study sessions as well as time at home creating their masterpieces.”
Fellow student, Tate Rinka, (pictured below) also submitted a map and deserves recognition for the countless hours spent working on his entry. *The Mapman contest is an annual contest inspired by Jim McMahon, the Junior Scholastic cartographer or mapmaker, and his travels. McMahon recently visited an ancient rock fortress in South Asia. With nearly 2 billion people, South Asia is the world’s most densely populated region. About 70% of the people who live there reside in rural communities and rely on agriculture to make a living. The region is particularly vulnerable to the effects of climate change. Droughts, floods, and heat waves have long been common there. South Asia is also home to a wide range of geographical features, including deserts, rainforests, and glaciers, as well as wild animals, such as elephants lions, and tigers.
By entering the Mapman contest, students were able to learn more about the geography and cultures of South Asia.
Below are the questions that were asked and the map provided: