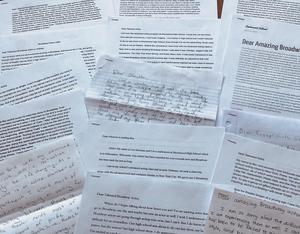 For a recent virtual learning project in Mr. King’s SHS Advanced Acting class, students were asked to write letters to struggling Broadway actors in hopes of lifting their spirits.

With shows on Broadway closed since COVID began, Broadway actors have been hit especially hard and Mr. King thought the class could help these actors by partnering with Broadway Cares/Equity Fights AIDS, a charity that provides services for Broadway professionals and is currently assisting artists struggling during the pandemic.

“Right now thousands of actors, technicians, costume designers, stage hands, ushers, musicians, etc. are not earning paychecks and struggling to pay rent in one of the most expensive cities in the world,” says King.  “I thought we could make a difference by connecting with these actors through letters.”

After collecting all the students’ letters, King sent them to Broadway Cares for distribution, along with a sizable donation towards their Broadway Cares/Equity Fights Aids COVID-19 Fundraiser.

“We received your very generous donation and beautiful letters from the students and I wanted to let you know that I can’t tell you how touched we were to receive such a thoughtful gift. I know the actors will appreciate hearing such kind words during this difficult time. I look forward to working together with you and your drama department in the future.”

(Pictured below: SHS Advanced Acting Class in NYC at the Lincoln Center)