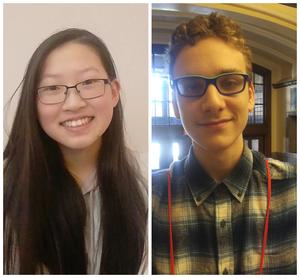 Ninth grader Alexis Hu and tenth grader Shai Biener make SHS history by qualifying
Shorewood High School ninth grader Alexis Hu and tenth grader Shai Biener (pictured left to right) are the first students in the school’s history to qualify for the American Invitational Math Exam (AIME), a prestigious invitational exam given to students with outstanding performance on the American Math Competition (AMC).
The AMC is the largest math competition for high school students, as well as the precursor to qualifying the USA Olympiad. The AMC 10-A, which Alexis and Shai participated in earlier this year, is a 25-question, 75-minute, multiple choice examination in high school mathematics for students in 10th grade and below. It is designed to promote the development and enhancement of problem-solving skills.
Alexis was one of the five top-scoring females in Wisconsin on the AMC 10-A and won a Maryam Mirzakhani AMC 10 award for her superior performance.
After receiving the AMC 10 results and qualifying for the AIME, Alexis and Shai began preparing for the exam, which they took last Saturday, June 6. Once scores are calculated, qualifying students will be invited to participate in the United States (Junior) Mathematical Olympiad later this month.

Alexis, who has been the assistant coach for SIS math teams for the past year, says that one of her biggest missions during her high school career is to improve girls' interests in math. She hopes that her exceptional performance in math competition will give other female Shorewood students the encouragement they need to pursue interests in STEM-related fields.
“I love to see that the math club presence in the Shorewood School District is growing,” says Alexis’ dad Yi Hu, an associate professor of electrical engineering at UWM, who has coached multiple SHS math and computer programming clubs, along with his colleague Prof. Jun Zhang (another math club student Henry Zhang's dad) and Mr. Sam Nadolsky (seven-grade math teacher at SIS). “This year, we had record breaking attendance of 30+ students for the MathCounts Chapter competition, and we hope the number continues to rise next year.”
For more information on how to get involved in one of the Shorewood Schools Math Clubs, contact: Mr. Sam Nadolsky (snadolsky@shorewood.k12.wi.us) or Ms. Jennifer Cosgrove (jcosgrove@shorewood.k12.wi.us).

For more information about the American Math Competitions, visit: https://www.maa.org/math-competitions