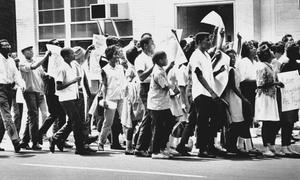 As part of Black History month, the District is focused on sharing resources for educators/parents related to the Civil Rights era. While Black history is much more than this era,  it’s critical for students to have a truthful & complete understanding of this foundational movement.


As stated by the Learning for Justice organization, “While revisiting familiar themes or introducing new projects during Black History Month, it’s important to resist reducing topics to feel-good factoids devoid of context. Many educators fall into the habit of passing on civil rights history that’s been whitewashed, from diluted accounts of civil rights efforts to omission of events and figures who were instrumental in spurring change. This is especially true in discussions of Dr. Martin Luther King, Jr. and Rosa Parks.”


Below are five ways that families and educators can help students truly understand civil rights history.

Learning about the movement in its entirety helps students understand the possibilities of civic engagement and the idea that they, too, can effect change. Talk with them about the brave young people who risked their freedom—and their lives—to ensure equality for their people. The classroom films Mighty Times: The Children’s March and Selma: The Bridge to the Ballot can help start discussions about the young people who fought for social change during the civil rights era. (Our free film kits each come with a viewer’s guide.) The article “A Time to Honor ‘The Children,’” which centers on the work of the Student Nonviolent Coordinating Committee, can teach young people about the college students who continued these efforts.

It’s critical that teachers/families create a safe environment where students feel free to speak authentically about social and economic inequality, violence, discrimination and white privilege—topics you can’t avoid when teaching this history. This guide Let’s Talk! provides an excellent classroom resource to start. In addition to Teaching Tolerance resources that accompany the guide, educators can lean on the experiences of students, their family members and community to facilitate healthy discussions that build competency and empathy.

Explore figures who weren’t as visible as other civil rights leaders because of their identities. While students may have seen images of women and young activists joining the fight for equality, they might wonder why only straight, Christian men were put forward as leaders. There were, in fact, plenty of women civil rights leaders throughout history, but they were often hidden or silenced because of their gender. In addition to those women whose contributions weren't included in the history books, some were never allowed to step into leadership roles. Women and girls who didn’t fit into what was considered a respectable mold were sometimes cast aside in the movement.

Teachers can dig into Browder v. Gayle, the Supreme Court case that outlawed segregation in public transportation. Review and discuss figures such as Aurelia Browder, Claudette Colvin and Jo Ann Robinson to show how black women before Parks created the blueprint that led to the Montgomery Bus Boycott and other desegregation victories.

Openly gay activists are also often hidden from textbooks. From Bayard Rustin, who organized the March on Washington, to author James Baldwin, the black LGBTQ community played a crucial role in shaping a movement that demanded the value of all identities. Teachers can learn how to open discussions about these figures and their activism in “Black LGBTQ History: Teachers Must Do a Better Job.”

Dr. Martin Luther King, Jr. is usually discussed and celebrated in classrooms/homes, but teachers/families can go a little further when exploring his activism. Analyze King’s speeches, sermons and writings more carefully. Students will see that he didn’t preach “colorblindness” or neutrality. It’s important for students to know that King’s activism was considered radical and dangerous by many—from United States government officials to members of the clergy. By the end of his life, he had campaigned against racism and imperialism while also calling for economic equality. Yet, his messages are often reduced to encouragements “not to see race” or to push “civility” during political discourse. Spending time close reading his words—including “The Drum Major Instinct” sermon and the “Letter From a Birmingham Jail”—students will see that King urged all citizens to disrupt oppressive structures, no matter how uncomfortable it was.

Rosa Parks is another figure who typically gets attention in classrooms, but there is a lot more to her activism than is often explored. Her courageous choice to not give up her seat to a white passenger on a bus is widely taught—but there’s rarely explanation about segregation laws and the previous organizing that went into the Montgomery Bus Boycott. Parks wasn’t an accidental activist. She wasn’t some meek, elderly woman overcome by exhaustion. She was only 42 at the start of the Montgomery Bus Boycott, and activism had always been part of her life. Yet, a common narrative suggests she was simply tired the day she refused to give up her bus seat to a white passenger. While it’s important to highlight the other women who played a big part in the boycott—like Jo Ann Robinson—students can still examine Parks’ lifelong activism, which includes advocacy for women who’d been sexually assaulted.

Help students understand that they must contextualize what happened in the past to create a better world in the future—and that the legacies of historical events remain. If they examine the goals and tactics of the civil rights movement, they’ll see that the same issues related to race, class and gender are present today. A great place to start is to have students compare the activism of the past to contemporary movements such as #BlackLivesMatter, as this teacher did with his first-graders.

Since the civil rights movement was a watershed era in American history, it’s extremely important that we get it right. Instead of minimizing the effects of white supremacy or continuing the erasure of some activists, we must continue the core mission of the movement: a demand for equity, justice and the respectful treatment of people of all identities. We can make Black History Month—and every month—from here on out a time to be honest about our history and truly acknowledge that all black lives matter.