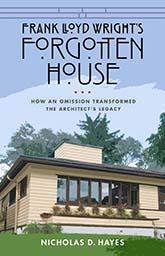 Meet Shorewood author Nicholas Hayes. Hayes will discuss his new book, Frank Lloyd Wright’s Forgotten House: How an Omission Transformed the Architect’s Legacy. The event, in partnership with Boswell Book Company and the Shorewood Historical Society, will be held virtually via Zoom on Monday, May, 17th at 7:00 PM.

Hayes’ book, Frank Lloyd Wright’s Forgotten House, explores the untold history that fills a crucial gap in Frank Lloyd Wright's oeuvre. Wright’s foray into affordable housing - the American System-Built Homes (ASBH) - is frequently overlooked. While continuing to advocate for the design of affordable small homes, Wright never spoke publicly of ASBH, and as a result, the heritage of many Wright-designed homes was forgotten. However, when Nicholas and Angela Hayes became stewards of one of them, they began to unearth evidence that revealed a one-hundred-year-old fiasco fueled by competing ambitions and conflicting visions that eventually gave way to Wright's most creative period.

Hayes leads innovation at a water technology company, and is the award-winning author of Saving Sailing: The Story of Choices, Families, Time Commitments, and How We Can Create a Better Future. He is also a columnist for Sailing Magazine. Hayes lives in Shorewood, Wisconsin.

This program is co-sponsored by the Boswell Book Company and the Shorewood Historical Society. It is free and open to the public. More information is available at www.shorewoodlibrary.org.