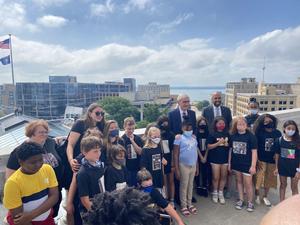 It’s a surreal moment for Atwater Elementary fourth-grade teacher Samantha Pietenpol: She is inside the Wisconsin State Capitol Rotunda on June 18, watching her students address the crowd at the Wisconsin Legislative Black Caucus’s Juneteenth celebration. This is the culmination of her class’s Juneteenth Day Advocacy Project, and Pietenpol could not be prouder of these kids.

She reflects back to a day in February when her class watched a video of Frederick Douglass’ descendants delivering his famous 1852 speech that called out the hypocrisy of celebrating the Fourth of July while slaves are not free. An idea was sparked.

“The day our Juneteenth project was born was probably my favorite day as a teacher, ever,” says Pietenpol. “It was so beautiful and so amazing. We had a class discussion on the speech, and one student said, ‘You know, Mrs. P, why do we celebrate the Fourth of July but not the day that the people were freed?’ That small question hit our classroom and exploded. It was mind blowing how hundreds of years later, the issue was still relevant. We dropped everything and started writing things down in notebooks on the whiteboard and into a Google document. We thought about how we could spread awareness about Juneteenth, which a ton of Americans have never heard of.”

From there, she says, the project took off and was completely student-driven: Kids crafted a persuasive letter to accompany a petition they created to make Juneteenth a federal holiday and even designed their own marketing materials to share with the community.

“We made it our own responsibility and used our free time to make posters to spread the word about Juneteenth,” says student Charlie Calton. “We had a poster showing information about Frederick Douglass, a poster uniting two flags to represent the United States and African heritage, a poster showcasing the Black fist representing Black pride and solidarity, some actual photographs from Juneteenth celebrations, and more.”

With assistance from District Technology Director Mickey Chavannes, the students also created a web-site and launched a social media campaign to amplify their message.

“We used the co-founders of Black Lives Matter as a good example for us,” says student Arri Steinmetz.

“Their movement started as a simple post on Facebook. These women used the power that the internet has to connect people across the world to come together to support a cause.”
The class goal was to reach 1,000 signatures on the petition, and they ultimately collected 1,684. The work caught the attention of State Senator Lena Taylor, who visited Pietenpol’s classroom to learn more about the project and share ways the students could continue to advocate for the cause.
Shortly after Taylor’s visit, the students were invited to visit the State Capitol on June 18 and present their project to an audience of Wisconsin legislators, including Governor Tony Evers. To the students’ surprise, one day before they were slated to go to Madison, President Biden signed legislation officially making Juneteenth a federal holiday.

In Madison, the students also witnessed a flag-raising ceremony, received a personal message from Juneteenth activist Opal Lee and spent the afternoon out-side the Capitol passing out their Juneteenth artwork.

“My students did absolutely amazing work, and it was an incredible experience for them to share and celebrate this work with their governor, their representatives and their fellow citizens from across the state,” says Pietenpol. “Many of them gave up their recesses, stuck around after Zoom meetings and spent countless extra hours at home working to spread awareness about Juneteenth. They all showed so much accountability and responsibility for their community. They were part of an incredible moment in history.”
Photo - Ms. Pietenpol and her class at the Juneteenth flag raising ceremony with Governor Evers (credit: Patrick Manning)