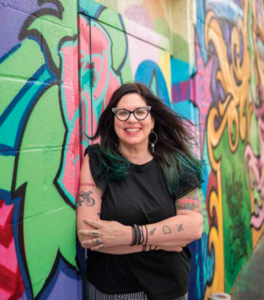 Molly Snyder (SHS '88) has built a career writing the untold stories of Milwaukee
Anyone who has visited one of Wisconsin’s wackiest attractions, chased down Milwaukee’s new mobile bakery food truck or perused a funky local retailer lately may have done so on inspiration from Molly Snyder.

Snyder, SHS ’88, is a senior writer for OnMilwaukee and has been with the digital media company almost since its inception. She has loved writing since childhood and at the age of 10 published her first piece, a poem called “The Unicorn” that ran in the now-defunct Shorewood Herald.

“I would say my writing career started at that moment,” Snyder says. “The experience of having something published had a very early effect on me. The excitement of a byline and seeing my work in print was really exciting for me, and it fueled me to want to publish more work.”

As a student at Shorewood High School, Snyder’s passion for writing led her to churn out features for the school paper, Shorewood Ripples. She found a mentor in her literature teacher and Ripples advisor, Michael Huth, whom she says encouraged her to keep writing.
“I definitely got an excellent education in Shorewood,” Snyder says. “The teachers were great and the classes were challenging, so I was very much prepared for college and it was a smooth, easy transition.”
Snyder earned a degree in English with an emphasis on creative writing and a minor in women’s studies from the University of Wisconsin-Milwaukee. She then held a series of jobs that were “not glamorous” but helped her develop into a professional writer. She jokes that to this day, her job at a safety catalog publisher means she can recite “a ridiculous amount of information on safety cones, eyewash stations and hair nets.”
Snyder’s career began to take off when she started freelancing for OnMilwaukee in 2000. Drawing on extensive knowledge of her hometown, she pitched compelling ideas for stories that had never been told. They were a hit with readers and within one year, she was offered a full-time job.
After 20 years writing thousands of stories about Milwaukee, Snyder has become a local media personality in her own right, with frequent interviews and appearances on local TV and radio stations. She also co-wrote the book Walking Milwaukee: 31 Tours of Brew City’s Neighborhoods with her partner, Royal Brevväxling. It was published last fall.
“I love writing about Milwaukee and telling stories that help move the city forward,” Snyder says. “No two days are ever the least bit similar. I have done some incredibly wacky things but also some incredibly meaningful interviews. Milwaukee is a very complicated city. I am very aware of the challenges and struggles it has and I want it to be a better place for more people to live, particularly people of color. I’m very critical of Milwaukee because I want it to become the best city it can be, but I also see a lot of beauty and feel very proud of the city. I believe in being authentic and I hope that with my writing I can continue putting more positivity and kindness into the world.”
To read Snyder’s stories, visit: onmilwaukee.com/by/mollysnyder.
Photo - OnMilwaukee writer Molly Snyder stands in front of the Hamburger Mary's mural in Milwaukee, which she included in her South Side mural tour writeup in June 2020 (credit: Patrick Manning)