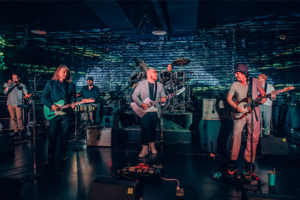 Harrison (SHS '67) treats crowd to Talking Heads songs
Shorewood graduate and Tradition of Excellence Awardee and Rock ‘n Roll Hall of Famer Jerry Harrison returned to Milwaukee to play Summerfest in September, performing Talking Heads songs with the band Tarkuaz and longtime musical collaborator Adrian Belew. The multi-piece band featured percussionists, horns, and back-up singers, bringing a dynamic and high-energy context to the beloved songs, many from the Remain in Light album. The musicians have toured across the country together, playing at different venues over the last year, and delivered an uptempo rhythmic set to the Summerfest crowd.
At Shorewood High School, Jerry Harrison studied music and played in rock bands. He went on to attend Harvard College where he graduated Magna Plus Cum Laude in Visual and Environmental Studies in 1972. While at Harvard, he joined The Modern Lovers, a seminal band in the development of Punk Rock music. He later met David Byrne, Chris Frantz and Tina Weymouth, who invited him to join the Talking Heads in January 1977.

The Talking Heads' ten albums are considered among the most important in rock and roll history. In addition to their first album Talking Heads '77, they include: More Songs About Buildings and Food; Fear of Music; Remain in Light; The Name of this Band is Talking Heads; Speaking in Tongues; Little Creatures; True Stories, Naked; and the album and film Stop Making Sense. The influence of the Talking Heads and their albums on music and musicians continues to this day. As a member of the Talking Heads, Mr. Harrison was inducted into the Rock and Roll Hall of Fame in 2002, won "Best Group Video" at the MTV Video Music Awards in 1987 and with engineer E.T. Thorngren, won five awards at the 2005 Surround Awards for the 5.1 remixes of the Talking Heads' albums. He also received a Grammy nomination for the album design of Fear of Music in 1980. He has three solo albums to his credit and has also been a successful music producer since 1981, among the more notable artists he has produced are: Violent Femmes; Bodeans; Crash Test Dummies; Live; Kenny Wayne Shepherd Band; No Doubt; and Foo Fighters. He was a producer of the album and film: Take Me to the River, which chronicles the assassination of Dr. Martin Luther King and the rebirth of the Memphis music scene, which was the winner of the 2013 South By Southwest Festival "Audience Award" and the 2013 London Raindance Film Festival's "Feature Film of the Festival Award."
Learn more about Jerry Harrison’s recent musical collaboration with Tarkuaz and Adrian Belew in the following interview:
https://riffmagazine.com/qa/jerry-harrison-adrian-belew-turkuaz-talking-heads/