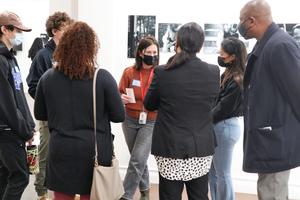 The classroom can be a center of societal change, and culturally responsive teaching has been a crucial element of the Shorewood School District’s ongoing work to advance equity.  Leading the way in creating opportunities for productive equity discussions is Shorewood’s New Horizons Charter School.

“New Horizons has always had social justice issues at the forefront of its curriculum, because what goes on in the historical and contemporary world is our curriculum,” says Renee Glembin, who teaches a New Horizon student cohort.

Last November, New Horizons director and teacher Bohdan Nedilsky invited his student cohort to explore Mothers in Black and White, a photography exhibit exploring the hopes, dreams and fears of mothers with Black sons. The photographer, Sharon Hughes, has said her intentions with the exhibit were to bring people together, across racial divides, to do the hard-but-necessary work of acknowledging overt and covert racism, and then work together to shift the collective consciousness of race in America.

Nedilsky’s students prepared by following Hughes’ work and reading related literature before a field trip to the exhibit gallery in a historically impoverished area of Chicago. Students studied the photos and read the respective narratives before participating in small-group discussions and interacting with Hughes.

“The photo that resonated with me most was of a mother hoping for peace and love for her kids,” says New Horizons senior Sage Buser. “It is such a basic yet complex thing … It seems like a simple request, but when you’re a mother raising a Black son, it becomes so much to ask for.” Nedilsky says it’s important for students to have the ability to grapple with societal issues, especially ones involving racial injustice.

“I use the term ‘grapple’ because there is no resolution,” he says. “It’s messy, emotionally charged, it requires a sensitivity and consideration. This trip offered something different for every person. While we prepped for this experience together, we have each had our own individual way of growing from it.”

Glembin’s student cohort has also infused equity discussions into the classroom, most recently through an investigative study of Nikole Hannah-Jones’s Pulitzer Prize-winning work The 1619 Project: A New Origin Story. The project is a series of stories exploring the through line from slavery to modern society.

Its central argument — that many of contemporary America’s outcomes are rooted in its early system of slavery — has sparked intense debate in the two years since it was published.

“I became interested in pursuing this project because I had heard so much uproar over it in the news, from both national and local (school) districts,” Glembin says.  “I wanted to investigate for myself why this was a study that other districts banned. I wanted the kids to investigate it and give their recommendation for or against it. I received nothing but support from my students’ families and the administration.”

The students were asked to select one story from the series to read and research, then present findings and lead a class discussion. Topics included “How False Beliefs in Physical Racial Differences Still Live in Medicine Today,” "Why Is Everyone Always Stealing Black Music?" and "Why American Prisons Owe Their Cruelty to Slavery.” Sophomore Leila Rosenblatt chose to study the myths of physical racial differences, looking at historical beliefs that Black people could better tolerate heat and harsher environments as compared with whites. “Fast- forward to today, and this mindset is still in effect,” Rosenblatt says. “A recent survey of medical scholars showed that at least half of them were still under the impression that at least one myth about the differences between races were true, including the belief that Black people are less sensitive to pain than white people. Black people still aren’t being treated right in the medical system, and it is not OK. I think it’s so important we read (these articles) because a lot of the history is covered up. Our society only shares what is tolerable to white people. How can we make reparations if we are ignorant to what’s really happened?”

Senior Carmen Wilder, another of Glembin’s students, says that studying The 1619 Project can change people’s mindsets.  “It changes how you treat people, it changes how you live your life, it can even change how you vote,” she says. “It might be uncomfortable, but it’s so important. By becoming aware, you can make the world a better place for everyone else.”

For more information on the District’s work in equity and diversity, visit shorewood.k12.wi.us/apps/pages/equity.