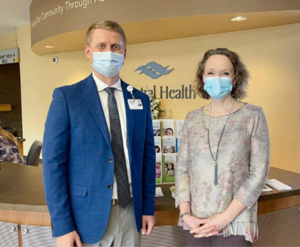 When asked about a typical workday, Karen Timberlake, SHS ‘85, replies that her job is “to move boulders and carry water.” But it’s not nearly as simple as her description, given that Timberlake is the interim secretary for Wisconsin’s Department of Health Services at a time when the world has been battling the Covid-19 pandemic for nearly two years.

It’s familiar territory for Timberlake, who led DHS between 2008 and 2011 under then-Governor Jim Doyle. At that time, she oversaw the response to another, albeit less-severe pandemic: H1N1.

Although Covid response has been a top priority since Timberlake took office in January 2021, the DHS also oversees state Medicaid, state nursing home regulation, and a range of health and social services programs on issues from substance abuse prevention to mental health to long-term care.

Timberlake says her role as the agency’s leader is to enable the 6,100-plus DHS employees “to do the work that they need to do in order to protect and promote health and safety for people all across our state, because that’s our mission,” she says. “I help triage issues and concerns that staff have decided are really urgent.”

Timberlake’s experiences as a Shorewood High School student provided her with a strong foundation for success. At SHS she participated in student council, mock trial, basketball and band. Outside of school, she worked as a teen peer educator at Planned Parenthood. After earning a degree in psychology at Indiana University Bloomington, Timberlake again worked for Planned Parenthood, first in Milwaukee and then as a lobbyist in Madison, Wis.

“That really was a good introduction for me into policy and policymaking and how laws affect people's lives,” she says. The experience piqued her interest in becoming a lawyer. By fall 1992, she had enrolled at Harvard Law School.

From there, Timberlake returned to Madison and held a series of state public service positions: assistant attorney general at the Department of Justice, director for the Office of State Employment Relations and, eventually, DHS secretary. After Doyle’s term ended, Timberlake directed a University of Wisconsin-Madison research center called the Population Health Institute and worked for lobbying and consulting company Michael Best Strategies.

Just over a year ago, she was tapped to return to the DHS secretary role in an interim capacity for Andrea Palm, who joined the Biden administration.

Throughout her career, Timberlake says, she has always found it rewarding to solve important issues and help others, particularly when she’s able to collaborate with communities and offer solutions and support.

As the need to focus on Covid becomes less urgent, Timberlake says her attention will turn to upcoming state budgets and the many ways to protect and promote health and safety across Wisconsin. “I think there will always be opportunities to work to improve people's health and well-being,” she says, “and I'm sure that's work I'll always be involved in, one way or another.”