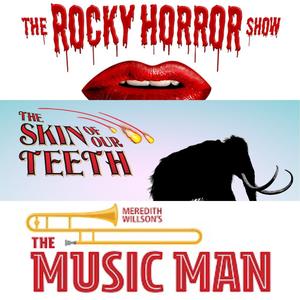 Season will include the fall play Skin of Our Teeth, winter musical The Rocky Horror Show, and spring musical The Music Man
The 2022-23 Shorewood High School Drama season has been announced and will be as follows: Fall Play: Skin of Our Teeth
Author: Thornton Wilder
Cast: 20-30 students
Description/Plot: This play was written by Madison, WI native and Pulitzer Prize winning playwright Thornton Wilder in 1942 during a time of great uncertainty in the world. It features a very large ensemble cast to tell the story of the Antrobuses and – no exaggeration – all of humankind. The play features a wooly mammoth and a dinosaur, and many others to tell the story of our beleaguered world in a time of crisis. This is a very odd and wonderful play by one of the United States greatest dramatic literary voices. It begins in the living room of the Antrobus home (Act I), continues an oceanfront (or lakefront) boardwalk (Act II), and concludes at the Antrobus home amidst the rubble of a world that has crumbled (Act III). Despite the way this sounds, it is a play about community, compassion and ultimately hope during seemingly hopeless times. Winter Musical: The Rocky Horror Show
Music, Lyrics, and Book by Richard O’Brien
Cast: 25-30 students
Description/Plot: The Rocky Horror Show will be a Shorewood High School premiere of the 1973 theatrical classic. This is a VERY well-known title from the film adaptation entitled Rocky Horror Picture Show. The Rocky Horror Show was written by actor, director, and musician Richard O’Brien, who began work on it while cast in the London production of the musical Hair. Though very different, both musicals dipped into rock music to create their dramatic soundscapes. In Rocky Horror, O’Brien tapped into his love of 1950’s and 60’s horror b-movies, along with music of the period.
The story centers around a pair of typical, wholesome, and very well-meaning teenagers whose car breaks down near a very mysterious manor on the outskirts of their town. When they come calling on the inhabitants of this manor, they discover a whole new world beyond their rather sheltered upbringing. Alternative lifestyles abound and shenanigans ensue in this fast-paced and super-fun theatrical romp.

Spring Musical: The Music Man
Music, Lyrics, Book by: Meredith Willson
Cast: 35-45 students
Description/Plot: The Music Man is set in the early 20th century in a small – but very proud – Iowa town called River City. It centers around the comings and goings of the town, and the arrival of the mysterious, and highly opportunistic Harold Hill. Hill arrives via train, poses as a band leader and organizer, selling musical instruments to all the town’s children, and promises to give music lessons to all of them. There’s only one problem, Harold knows nothing about music! Town librarian, Marian Paroo sees through Harold’s scheme, and nearly outs him before Harold helps Marian’s younger brother overcome his speech impediment. She begins to soften to him and, as this is a musical comedy, they fall in love!