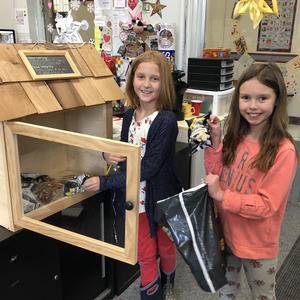 Group of MAC 2 students use pennies to make a difference
It all started last fall when the Lake Bluff Elementary MAC 2 Oak class read an article about how some of the general population feel that the penny should be removed from circulation. After reading this article, a small group of students were so greatly bothered by this that they decided to band together and brainstorm ways to prove that the penny is still useful and necessary. The students created the group “The Penny People," (TPP) open to all students, with the mission to collect pennies from the Lake Bluff School community and use them to do some good.

Since TPP formed, the students have advertised their cause through self-made posters placed throughout the building as well as through the use of the school’s daily announcements. The students designed their own container which is stationed outside of their classroom for collecting pennies, and it has attracted a lot of attention.

Thanks to the successful collection of pennies thus far, TPP has used the money to purchase and donate two batches of snacks to the Lake Bluff "Snack Shack." The snacks at Snack Shack are used for kids who either forget a snack or cannot afford one.

“This is such a feel-good story and a great example of our kids leading their own learning and being change agents in an authentic way,” says Lake Bluff principal Angela Patterson. “I am very proud of this group for their tremendous efforts.”