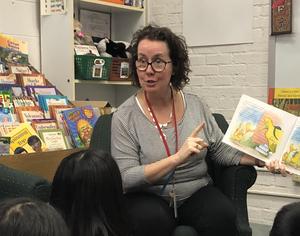 Taught by Dr. Beth Giles, Director of Education Outreach and Partnership at UW-Madison, the class focuses on projects which look at teaching practices in the classroom through the lens of equity. For Tibbits’ action research project, she has been tackling how she can break down the gender biases her international students often have upon entering the U.S.

“The reason I chose to focus on this particular topic is because I’ve noticed in my ten years [in the ELL role] a pattern where newcomer students tend to come in with strong gender biases, and periodically racial biases as well,” says Tibbits.

As the starting point for collecting data, Tibbits created her own picture-heavy survey, which she administered to the new students, grades 4-6, earlier this school year. Students were asked to look at pictures and determine whether each activity shown was characterized for females, males, or both genders.

Following the survey distribution, Tibbits began reading gender equity focused children’s books to her students once a week and paired the reading with a class discussion.

“I found a lot of great books through research and through the guidance of Dr. Giles,” says Tibbits. “With my book selections, I have tried to be mindful to have equal representation of both genders. After each reading, I take anecdotal notes and record reactions and comments that I notice during discussions with my students.”

At the end of the school year, Tibbits plans to re-administer her survey and compare the results of both surveys taken by each student. Her hope is that the weekly book readings and discussions will help break down these biases and that students will illustrate less gender bias when given the survey for the second time.

“So far from my research, I’ve noticed that there seems to be a greater gender bias with males than females. What I mean by this is that there seems to be a stronger bias towards what boys are and are not supposed to do. I find this fascinating and I’m interested to dig into this notion further.”
Once Tibbits has administered the final survey and compiled all of the data from both surveys, she will present her findings to an audience on June 14th during a morning event at the UW- Madison campus. Audience members will include not only other class participants and UW-Madison faculty, but also fairly big stakeholders such as legislators and investors, who may be interested in funding further research on the topics presented.

When asked why Tibbits thinks it’s important for teachers to be taking courses such as the Action Research class, she says that peer feedback has been extremely helpful and that it has helped shape her project. Additionally, she feels that most teachers are already doing action research in their classrooms and that by taking a course on it, the research is just being formalized.

“For me, [gender biases] is something I’ve always wanted to take a harder look at it and this course is forcing me to take a harder look at it” says Tibbits. “I’m really focusing on how I can realistically break down these biases. I’ve been having discussions with my students for many years now, but actually using data to track the effects on my students is just on another level, and if the readings do actually help my students change their mindsets, it will help validate my feelings that I should be doing these lessons every year.”