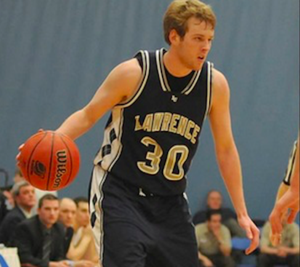 Ryan Kroeger, college graduate of 2009, will be inducted this fall for his accomplishments on the basketball court
Atwater's Dean of Students, Ryan Kroeger, is one of six new members set to be inducted into Lawrence University Intercollegiate Athletic Hall of Fame this fall. He will also be honored at halftime of Lawrence's football game vs. Illinois College on Ron Roberts Field at the Banta Bowl on Oct. 5.
Kroeger stands as one of the finest shooting guards and all-around players in Lawrence University's basketball history and is one of just two Vikings to earn All-America honors.
A D3hoops.com All-American in 2009, Kroeger was a two-time Midwest Conference Player of the Year. Kroeger was a key player as the Vikings went 79-21 over a four-year stretch, won three Midwest Conference Championships, three MWC Tournament titles and made three NCAA Division III Tournament appearances. The 2005-06 squad posted the best record in the nation and advanced to the NCAA Division III Tournament Sweet 16.
A career 53.1 percent shooter from the floor, Kroeger finished third on Lawrence's career scoring list with 1,537 points, and his name is all over the school's record book. The top 3-point shooter in school history, Kroeger connected on 45.2 percent of his shots from beyond the arc. He finished second in school history with 184 3-pointers, and his career scoring average of 15.4 points ranked eighth. A prolific free-throw shooter, Kroeger finished fourth in career foul shooting at 81.8 percent, and he is second with 381 free throws made, just one behind career leader Chris Braier.
Kroeger, who ranked sixth with 263 career assists, also holds three game records. He has the school marks for field goal percentage (100 percent, 11-11 vs. Grinnell), 3-point shooting (100 percent, 5-5 vs. Ripon) and free-throw shooting (100 percent, 16-16 vs. Carroll and 13-13 vs. Knox).
A native of Glendale, Wis., Kroeger was a rookie but played a key reserve role in 2005-06 when the Vikings posted an undefeated regular season and spent more than a month as the nation's No. 1-ranked team. That team went on to record a 25-1 record and reach the Sweet 16 of the NCAA Tournament. Kroeger was a second-team All-MWC pick in 2006-07 as the Vikings finished 13-10.
Kroeger led the Vikings to the MWC title and a 22-3 record in 2007-08 while earning MWC Player of the Year honors. Kroeger repeated as MWC Player of the Year in 2008-09 as the Vikings put together a 19-7 record and claimed another MWC championship. Kroeger and Braier are the only Vikings to earn two MWC Player of the Year honors.
Kroeger graduated with a degree in history from Lawrence and earned a pair of master's degrees, one in urban education and another in educational leadership, from Cardinal Stritch University.
(Information taken from the Lawrence University Athletics website.)