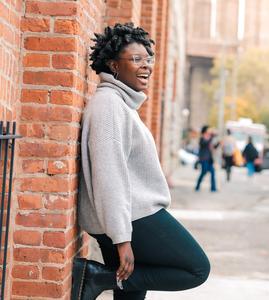 Nia Kamara wins “High School Student Leader of the Year” award
On Tuesday, October 8th, SHS senior Nia Kamara was recognized through the Wisconsin Leadership Summit as the “High School Student Leader of the Year” at the Wisconsin Leadership Community Choice Awards.
Nia was awarded this exceptional honor for her extensive work in youth-led tobacco education and prevention, especially through serving on the FACT statewide youth advisory board.
FACT is Wisconsin’s youth-lead tobacco prevention program, which empowers over 3,000 teen members in grades 7-12 in about 30 groups throughout the state to spread the truth about tobacco. FACT members lead advocacy initiatives including peer-to-peer education, media outreach, and meeting with state and local leaders. Their efforts have helped reduce youth tobacco use and have played an integral part in changing community policies on secondhand smoke and retail sales to youth. The movement is managed by the American Lung Association and is designed to reduce the burden of tobacco in Wisconsin.
“My mom does public health work and she introduced me to FACT back in 7th grade” says Nia. “Through my many years participating in FACT, I have learned so much about tobacco use and prevention but I am still learning new things all the time, so I understand how important it is for me to continue to spread awareness of the damaging effects of tobacco.” (Nia, pictured second from right, with other FACT members)
In addition to her participation in FACT, Nia was also identified—through a very rigorous process—by the Campaign for Tobacco Free Kids, a national organization that works to create the next generation of tobacco-free youth. Through this national organization, Nia serves as the Youth Ambassador for the state of Wisconsin which allows her to represent and lobby for youth on tobacco-related issues at the local, city, state and federal levels.
Through her work both with FACT and the Campaign for Tobacco Free Kids, Nia has expressed her opinions on restricting youth access to tobacco to our current Governor, Lt Governor, US Surgeon General and state and local elected officials.
“There are so many rewarding things I’ve experienced from participating [in all of these organizations]," she says. "I’ve gained many useful life skills such as public speaking, collaboration, and advocating for myself. I would say one of my greatest achievements was when my fellow FACT members and I were able to help increase the citation for selling cigarettes to minors by over $500. It was exciting to see that we played a role in making a big, positive difference in the community. ”
To learn more about FACT, visit: https://factmovement.org/
To learn more about the Campaign for Tobacco Free Kids, visit: https://www.tobaccofreekids.org/