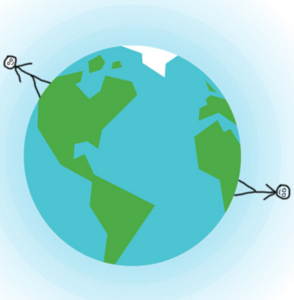 For the past 5 years, Shorewood Intermediate School French teacher, Madame Koerten has had a Pen Pal collaboration with schools in French-speaking countries. Through this partnership, SIS 8th grade students (and now 7th grade students too) in Koerten’s class have had the opportunity to exchange letters and videos with students in Paris and before that, Martinique. The students learn so much about each other’s cultures through this process and get very creative when it comes to making videos – filming concepts such as “a day in the life of a SIS student.” So far this school year, the SIS students have received their first letters from their pen pals and have since responded.

Below is a video of Madame Koerten's presentation to the School Board, along with the help of a few of her students. The students share their unique experiences in French class, and explain how they have had the opportunity to do things such as create bitmojis of themselves and use 3D simulators to see what their pen pals classroom settings are like.

Below is an excerpt written by Madame Koerten describing her Pen Pal program and its effect on student learning and growth.

“It is common knowledge that the more efficient method to acquire a language is to be immersed in an environment where that language is spoken. In reality, not everyone is able to make a trip and put themselves in those learning environments. I’ve been working at Shorewood Intermediate School for 6 years and since the very beginning I had a vision on how I wanted my students to learn French. I always wanted to break away from the traditional teaching which is lecturing the students and having them complete activity sheets. Not only is this type of teaching proven not to be very effective when it comes to earning a language, but it is boring for me and my students who are digital natives. I wanted to innovate and go beyond the textbook activities, but before I could pursue that route, I had to give myself the means to accomplish this goal. I was confronted with a big problem; the school budget is very limited so I could not rely on that funding. My only option was to write grants to get what I needed.

Every year for the past 5 years (twice a year) I submitted grants for French-English dictionaries, a 360-degree camera, software, headphone, iPads, and storage cart. After multiple attempts and rejections, I was granted those tools. Little by little I was able to get what I needed to transform my curriculum. By 2018, I finally got 16 iPads, a storage cart, a 360-degree camera, 30 French-English dictionaries, and 30 sets of headphones with microphones. These new tools allowed me to accomplish great projects with the students and provide them with a cutting-edge environment to improve their language learning.

One of the biggest projects I worked on, was to connect my 8th grade classes to French students in Martinique (Caribbean) and Paris via the Pen Pal program that I started 4 years ago. Being able to communicate to actual French natives is an amazing opportunity for my students to not only practice their French but also improve, the quality of their fluency. The first year my student created a video where they could show to their pen pal their school (see video here) their pen pal also sent us a video of their school (video here) My student where thrill because now learning French had become “real” to them. It was not just CD, or pre-made videos from Textbook company.  The program had connected them to the world.  The second year my I wanted to go beyond the 2D classic video and have my students do a 3D virtual reality video for their Pen Pal. It was very ambitious because I had to learn that kind of technology myself, before I could have my students create that project. I then purchase a 360-degree camera with the SEED grant, my 8th graders created a video tour of SIS all in French for their Pen pals.

Throughout the year I could see my students improve their 4 core of language acquisition. They had a better listening comprehension because they were not learning French through my voice only. Their writing was improving too because they were writing to a real person and not just completing an activity sheet.

Besides improving their French in a more creative approach, they are also connecting with native speakers all over the world.  My French class students were able to FaceTime with students in Martinique (A French island in the Caribbean) and also with students in Paris. During the summer of 2018, I went to Martinique and met in person with the French students and their teacher. I shared with them the activities and projects that my students made for them. I also brought along a pair of VR goggles. The students were amazed on what my pupils did and how they were able to use such advanced technology. (See video here.)

Even though most of the students at SIS own a mobile device, most of them don’t know how to create a document, attach a picture, and many other skills. In fact, they are passive users which means that they only consume their information, watch their videos, use social media, take pictures, and that’s about it.  In the World Language Department, we are teaching them how to be 21st century learners.  They are not only learning a language, but also important skills that they will need as college students and beyond.”

For more information on the Pen Pal program and to see what the students have done in previous years, visit Madame’s website.