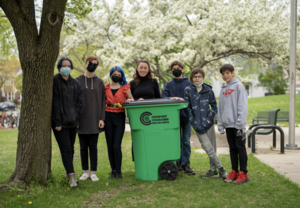 SIS students bring composting to their cafeteria
Of the estimated 146.1 million tons of municipal solid waste added to greenhouse gas-producing landfills each year, food waste is the largest component. Though much of it is compostable, the Environ-mental Protection Agency reports that just over 4 percent of food waste is actually composted.
Fueled by these statistics and concerned about their school’s environmental footprint, the Shorewood Intermediate School Environmental Club set out in fall 2019 to bring composting to their school’s cafeteria. Although the pandemic abruptly halted the project, it was revived this past spring.
“The goal has always been to reduce the school’s environmental footprint and, therefore, the amount of methane gasses released in the atmosphere,” says the club’s advisor, Sarah Kopplin, who teaches social studies at SIS. “The students who originated this initiative were passionate about the work and set the framework and foundation for this younger group to continue the legacy and implement the composting program (in 2022).”
The club partnered with Com-post Crusaders, a local organization that services the Village of Shorewood’s composting program. Required to determine bin placement, capacity and logistics, students spent three weeks taking turns sorting through the school’s lunchroom  trash and collecting data inventory on how much compostable and recyclable material could be rerouted. The answer: nearly  30 percent, each.
SIS eighth grader and club treasurer Logan Borchardt says while the majority of SIS students supported the initiative, club members continually broadcast educational videos and slide-shows “in the hopes that those who didn’t understand the  importance of composting would learn that every little thing helps and that if we all do our part, we can make a big impact.”
After some successful fundraising (for supplies), strong  marketing efforts and a lot of planning with school administration, club members officially implemented the composting program this past April. They incentivized the student body with composting competitions between grades, solicited feedback about what might make the composting process easier and more effective, and took turns promoting waste mindfulness in the lunchroom.
“The day we finally got the  composting bins, painted them green and realized that the  composting system was actually in place and that we had done it was so rewarding,” says eighth grader Hope Conigliaro, the club’s president. “We’re proud to say that by the end of the school year, we ended up with roughly 137 pounds of compost. I believe with the composting program solidly in place now, we will have much more compost next year!”
The group hopes to expand the initiative District-wide,  and Kopplin says she has no doubts that they will succeed.  “This initiative was completely driven by 12- to 14-year-old students,” she says. “They did all the hard work to make this happen. It really shows what kids are capable of doing. It shows they deeply care about climate change and are concerned about their future in the world and our environment. They want adults around them to make better decisions. I think it’s really important for us to listen to them.”
Pictured: Members of the Shorewood Intermediate School Environmental Club stand outside SIS with a  compost bin, used to compost food waste from the school  cafeteria. From left:  Charlie Taylor,  Dmitri Fortier,  Hope Conigliaro,  advisor Sarah  Kopplin, Diego Murphy, Teo Pheister, Logan Borchardt.  [photo credit: Patrick Manning]