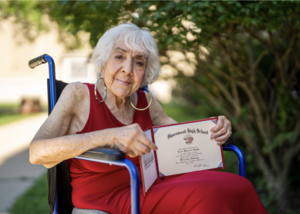 Rose Smith's lifelong service to others is recognized with an honorary SHS diploma
In 1948, at barely 17 years old, Rose Smith made what she calls the toughest decision of her life. Her Sicilian immigrant father had lost his job at a Milwaukee steel foundry, and Rose decided that as the oldest of five children, she should drop out of high school and work to help support the family.
“I didn’t tell my dad until after my mother signed off on it, because he never would have agreed to it,” recalls Rose, who lived in Milwaukee at the time and now resides in Shorewood. “He was very angry when he found out, but he got over it.”
A top student, Rose abandoned her academic ambitions and instead went to work for a local dry cleaner, where she spent long hours on her feet in the steamy back  room. She dutifully turned over every paycheck to her mother and watched as her  four siblings went on to graduate from high school and then college.
It was a bittersweet time: Rose was proud to help her family, but her parents had always stressed the impor-tance of getting an education, and she felt she had missed her chance.
As a very young adult, Rose was given managerial and supervisory duties at work. In her free time, she loved to go dancing; she met her now-husband, Wayne, at a big band concert at the Eagles Ballroom. After his Korean War service, the couple had two children. In 1966, the family moved to Shorewood, where Rose devoted much of her free time to volunteer work, including for the Shorewood School District and the Shorewood Senior Resource Center. She also worked part time at Kemp’s Rexall Drug Store.
Rose’s daughter, Jan Smith, SHS ’72, says her mother always regretted not finishing high school. “Every once in a while, she’d wistfully say, ‘I’m the only one who never graduated,’” Jan remembers. “I knew she thought about it often.” Last year, Jan reached out to Shorewood High School Principal Tim Kenney with the idea that her mother  receive an honorary high school diploma at the next graduation ceremony. Kenney says he knew instantly that this would not only be meaningful for Rose, but would also demonstrate a living embodiment of the  values he wanted to impress upon his graduating  seniors: kindness, gratitude, and living a life of  purpose and service.

On June 5, 2022 — more than 70 years after she  would have graduated from high school — Rose Smith was wheeled onto the SHS Gensler Auditorium stage  to receive her honorary diploma.

Before bringing Rose on stage, Kenney told her story to the class of 2022 and their families, emphasizing that her life had been one of service and taking care of others.