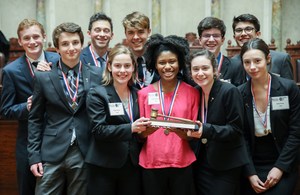 On Sunday, March 11, at the Wisconsin Supreme Court hearing room in Madison, the Shorewood High School Varsity Mock Trail team competed in the finals of the State Tournament, and took first place, beating out DC Everest High School. The team is now preparing for nationals in Reno, NV.

In their fifteenth consecutive trip to the State Mock Trial Tournament, the Shorewood High School (SHS) Varsity Mock Trial team competed and took home first place in the final round of the State Tournament on Sunday March 11, the fourth time in the school's history to achieve this feat. The team will now be advancing to the 2018 National Mock Trial Tournament in Reno, Nevada, May 10-12.

Mock Trial is an extracurricular that provides high school students with an opportunity to act as attorneys and witnesses in a court simulation, trying a case developed by State Bar members. The students, grouped in teams of six to 12 members, get to present their case before a panel of volunteer attorneys and judges to earn points for performance and knowledge of the law in regional, state, and national competitions.

The road to State Champions was a hard and challenging one for the SHS Varsity Mock Trial Team, as prep began way back in October. The 2017-18 JV (Grey) and Varsity (Red) teams, consisting of 22 students and three coaches, were formed just before Thanksgiving. Practices were held three times a week, in the evenings, to accommodate the very busy schedules of the students, and their volunteer attorney coaches. Two Saturday practice tournaments held in January at Nicolet and Brookfield Academy helped the team hone their skills before the regional tournament in February.

"The time commitment for students and coaches alike is huge," said Coach & SHS Teacher Debra Schwinn. "Right from the start, we are practicing six hours a week on Tuesdays, Thursdays, and Sundays. Though it's an intense schedule, the students who join are very passionate about and interested in law, by the first practice tournament in January the group becomes one of the closest knit teams students will ever find [at SHS]."

The first formal competition for the SHS team was the Regional Tournament in MIlwaukee at the federal courthouse downtown on Saturday, February 10th. Teams from over one hundred Wisconsin high schools participated that day in eleven regions around the state. Mock Trial is a State Bar of Wisconsin program that began in 1983 as part of the Public Education section of the Bar, and has grown in participation every year since.

The SHS Varsity team ended up taking second place in this year's competition, despite an undefeated 4-0 record, and a perfect ballot score of 12. From there, the SHS team along with other regional winners/runners-up advanced to the State Semifinals in Madison on March 9th and 10th. After four rounds of competition in the semi-finals where they competed against La Crosse, Brookfield Academy, DC Everest and Whitefish Bay, the Varsity (Red) team qualified for the State Finals the next day. The final round was held in the Wisconsin Supreme Court hearing room at the Capitol, before a panel of four Wisconsin Circuit Court judges and a Federal Magistrate. SHS won the championship round, taking all five judges' ballots in a spirited bout against a very tough DC Everest team.

The team is now full speed ahead with preparations for the National Tournament. They will receive a new case on April 1st at 12:01 PDT time, and will begin prepping immediately. "If we are going to Nationals, we are going to do it right," said Schwinn. "While this is exciting territory for us, we are super excited to be focusing on a new case and we are going to put forth 100% effort."

In order to attend Nationals, the team must raise $13,000 to cover costs. Around $3,700 has been raised so far but the team still has a way to go to reach their goal. If you are interested in donating, please visit: https://www.gofundme.com/mocktrialshorewood