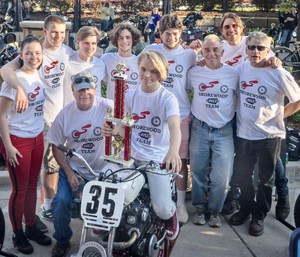 Founded by The Iron Horse Hotel in 2011, BUILD is a non-profit educational organization dedicated to pairing teams of high school students with bike-building mentors in a collective effort to learn valuable life and interpersonal skills while working on motorcycles.

During the annual BUILD season, from January to June, each participating team is given a vintage motorcycle by BUILD to work on, with guidance from mentors, in the team’s designated work space with the end goal of racing the bike in one or more American Flat Track motorcycle races. The BUILD program provides the chassis, working motor, and core components of the bike for the team to complete building with a few customized items, including the look and design of the bike.

The Shorewood team’s participation in the BUILD program was supported by the $1M Meet the Match Campaign and the Shorewood SEED Foundation.

To learn more about Shorewood’s BUILD team, visit their page on Instagram.