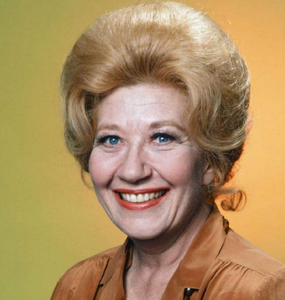 The Shorewood community was saddened to learn of the loss of actress Charlotte (Lubotsky) Rae, who passed away on Sunday, August 5, 2018. She was a 1944 graduate of Shorewood High School.

Charlotte Lubotsky's love of music, dance, and drama developed at an early age, which caused the 1944 Copperdome yearbook to note that she took her “hobbies” very seriously. She sang with the Glee Club, wrote and performed monologues for student assemblies, and late in her career, performed on the Shorewood stage in the drama “Quality Street.” She also performed with community theaters in the area.

She attended Northwestern University’s drama program and, while working in radio and theater in the Chicago area, began using her stage name, Charlotte Rae. After graduation, she moved to New York where she eventually played on Broadway and performed with the New York Shakespeare Festival. She is best remembered for her portrayal as the original Mammy Yokum in the musical “L’il Abner.”

After moving to California, Charlotte became more involved in television. She played Mrs. Garrett on "Diff'rent Strokes" and “The Facts of Life” from 1979-1986 and appeared in a number of other television shows, but continued to perform in theater, her first love. She received an Emmy nomination for Outstanding Actress in a Comedy Series in 1982, and in 1986, she was inducted in the Wisconsin Performing Hall of Fame at the Marcus Center for the Performing Arts.

“We are saddened by the loss of Charlotte Rae, and our thoughts are with her family and friends,” said Superintendent Bryan Davis. “We are very proud to call her a graduate of Shorewood High School, and she will always remain an inspiration to our students.”