School Board Member Pablo Muirhead Elected to ACTFL Board of Directors 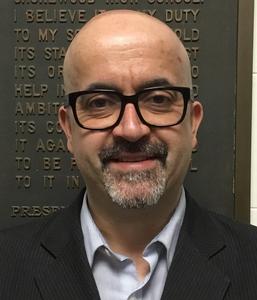 Muirhead begins duties for American Council on the Teaching of Foreign Languages (ACTFL) in January 2019
The American Council on the Teaching of Foreign Languages (ACTFL) recently announced the newly elected and appointed members of the Board of Directors, one of which is Shorewood School Board Member Pablo Muirhead. Muirhead was elected to serve as a board member for High Education and will begin his term on January 1, 2019.
“I am thrilled that I’ve been elected and I look forward to serving ACTFL and its members,” says Muirhead.
Building bridges between cultures through language education inspires Muirhead to grow daily. Raised bilingually, he was fortunate to spend his childhood in both the U.S. and Peru. Later, he went on to live in Indonesia and Germany where he gained proficiency in both the language and culture of his hosts. These formative experiences set him on course for a career as a language educator and continue to inform the work he does every day. Pablo first presented at ACTFL during his second year of teaching in 1997 and has been a frequent presenter over the years on topics ranging from SLA to critical pedagogy and more recently, cultural competence.
According to its website, ACTFL “is “dedicated to the improvement and expansion of the teaching and learning of all languages at all levels of instruction. ACTFL is an individual membership organization of more than 12,500 language educators and administrators from elementary through graduate education, as well as government and industry. Since its founding (in 1967), ACTFL has become synonymous with innovation, quality, and reliability in meeting the changing needs of language educators and their students. From the development of Proficiency Guidelines, to its leadership role in the creation of national standards, ACTFL focuses on issues that are critical to the growth of both the profession and the individual teacher.”
The District congratulates Muirhead on this accomplishment and looks forward to seeing the great work he will do to help improve and expand the teaching of all languages with ACTFL.
To learn more about ACTFL, visit: https://www.actfl.org/