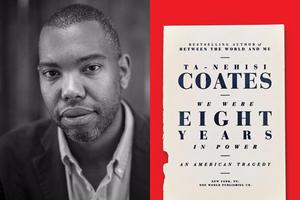 We Were Eight Years in Power examines challenging yet critical topics such as mass incarceration, reparations, segregation, and systematic racism. This month’s community conversation will focus on Chapter Eight of Coates’ book which is titled “My President was Black.” Dr. Martha Barry, Racial Justice Director at the YWCA of Southeast Wisconsin, will facilitate the discussion. Even if you have not yet taken part in a conversation in this series, you are welcome. We Were Eight Years in Power is available at the library, and the essays in their original version are available online.

Barry is a racial justice trainer, connector, bridge builder, and dedicated leader.
Her eleven years with the YWCA Southeast Wisconsin have allowed her to hone her pursuit of racial justice by building community, creating curriculum addressing racism, and advising nonprofit and business leaders on next steps in their racial equity efforts. Barry’s work includes community education on eliminating racism through the six-part series Unlearning Racism: Tools for Action. Barry has her B.S. from Edgewood College, M.S. from University of Wisconsin-Madison, and her Ph.D. from Cardinal Stritch University.

This program is co-sponsored by the Shorewood Public Library, the Shorewood School District, and the YWCA of Southeastern Wisconsin.

This event is free and open to the public.
More information is available at http://www.shorewoodlibrary.org/