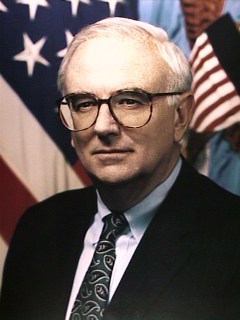 Les Aspin, a 1956 Shorewood High School graduate, served as a United States Representative from 1971 to 1993 and the United States Secretary of Defense under President Bill Clinton from 1993 until 1994. Though he was a member of the Democratic party as a representative, Aspin was known for taking a middling stance on most issues and was widely regarded by his peers as an intellectual.

Even before his graduation from MIT, Aspin secured a position as an aide to Wisconsin senator William Proxmire, serving as Proxmire's 1964 campaign manager. In the midst of the Vietnam War, Aspin joined the Army and completed two years of active duty as an economist at the Pentagon. Once his service obligation was complete, Aspin returned home to Wisconsin to manage Lyndon B. Johnson's re-election campaign, eventually putting his political interests on pause to teach economics at Marquette University.

In 1970, Aspin vied for the Democratic nomination for the U.S. House of Representatives, winning by a very narrow margin confirmed only after a recount. Known for his anti-war, pro-employment stance, Aspin was a quick political favorite. However, his tenure in office wasn't without controversy. During the Reagan administration, Aspin lost favor with Democrats by failing to eliminate the MX missile program and supporting the extension of military aid to rebels in Nicaragua.

President Bill Clinton elected Aspin to serve as Secretary of Defense in 1993. During his short time in that position, Aspin dealt with issues such as homosexuals in the military, U.S. involvement in Somalia and Bosnia, and budgetary management. Due to ongoing health issues, Aspin resigned from the cabinet after less than a year.

Apart from a brief marriage in the 1970's, Aspin eschewed family life in favor of his work. His closest companion was a sheepdog named Junket who often accompanied him to the office and even appears in his official congressional portrait. Aspin suffered a stroke in May 1995 and passed away shortly thereafter due to ensuing cardiovascular complications. He is buried in Brookfield's Wisconsin Memorial Park Cemetery.