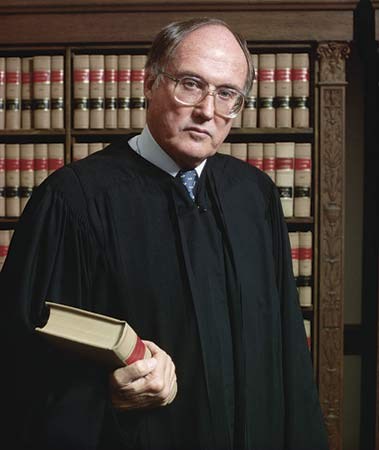 William H. Rehnquist graduated from Shorewood High School in 1942, later going on to become the 16th Chief Justice of the United States of America and one of Shorewood's most prestigious alumni.

On October 1, 1924, Rehnquist was born to Mary and William B. Rehnquist, of Milwaukee, Wisconsin. After graduating from Shorewood High School, Rehnquist briefly attended Kenyon College before enlisting in the U.S. Army Air Forces. He was placed on assignments mainly within the U.S. from 1943 until 1946, when he was placed into a pre-meteorology program at Denison University in Granville, Ohio. When that program was shut down in 1944, Rehnquist was dispatched on a variety of short-term assignments in the southern United States before finally being chosen for a long-term training program that taught him the maintenance and repair of weather instruments. This training resulted in Rehnquist being sent to North Africa to act as a weather observer until the conclusion of World War II.

With the help of the G.I. Bill, Rehnquist later attended Stanford University, completing both a B.A. and M.A. in political science, in addition to another M.A. in government from Harvard University in 1950. With a clear interest piqued in law and policy, Rehnquist then graduated from Stanford Law School in 1952. Though Stanford did not rank students at the time, Rehnquist served as class valedictorian and was thought to have been first in his class.

Finished with his formal education, Rehnquist went on to serve as law clerk for Justice Robert H. Jackson until 1953, when he relocated to Phoenix, Arizona to conduct his own private law practice until 1969. An active member of the Republican Party, Rehnquist returned to Washington, DC to serve as Assistant Attorney General of the Office of Legal Counsel from 1969 to 1971, when he was nominated as Associate Justice by President Richard Nixon.

Upon the retirement of Chief Justice Warren Burger in 1986, President Ronald Reagan nominated Rehnquist to fill the position. This was a decision that was met with unanimous enthusiasm among the Court.

In 1991, Rehnquist made an appearance at his Shorewood High School reunion, where he was introduced simply as the "former co-feature editor of Ripples," the SHS student newspaper. While the fact that he was acting Chief Justice was understated during the reunion, Rehnquist was associated with his sense of humor, lack of athleticism, and mastery of petty trivia.

Rehnquist served as Chief Justice of the United States until his death in September of 2005, just short of his 81st birthday. Eulogizing his predecessor in the Harvard Law Review, Chief Justice Roberts described Rehnquist as "direct, straightforward, utterly without pretense – and a patriot who loved and served his country. He was completely unaffected in manner." Rehnquist was preceded in death by Nan Cornell, his wife of 52 years, and is survived by three children, James, Janet, and Nancy.